Raising awareness of the Russian-speaking community

We bring attention of government agencies, the media, and other communities in New York to Russian-speaking Americans’ past and present, as well as to our struggle for recognition and equitable access to resources.

We organize and help others organize community response to expressions of anti-immigrant, anti-Russian, anti-Semitic, and general anti-minority bias in the media, labor market, and the workplace.

Assistance with integration into American society

We educate newcomers from former Soviet Union countries about key venues for integration into the economic and political system, and help with access to social services, government agencies, religious institutions etc. 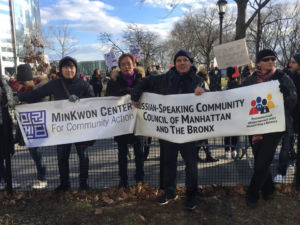